This article looks at the changes in remuneration for ASX listed company incumbent CEOs from 2014 to 2015.

In summary, 35% of CEOs received no increase in fixed remuneration. Overall trends suggest that increases in fixed pay and short-term incentives (STIs) are modest but long-term incentives (LTIs) are increasing in value.

The increase in LTIs may be related to both the constraints on fixed pay movements and the preference of investors to see rewards linked to longer-term returns.

We analysed the change in remuneration between the 2014 and 2015 disclosures for the 135 individuals who occupied the same ASX 300 CEO position in 2015 as in 2014. The number of CEOs included in the analysis is less than 300 because the CEO had to be in the same position for the full two years while the company remained in the ASX 300 for the same period. Additionally, FYE 31 December 2015 disclosures are not yet available so these companies have been excluded. More than 25% of the ASX 300 CEOs were not in this position in the prior year. In effect, this study measures the reward changes to survivors. Hence, it may reflect a slight bias to better performers, as some of the CEOs who turned over did so because of performance issues. The sample has not been diluted with data from relatively new incumbents, who are often internal promotions, and who start at levels of pay lower than their predecessor. Data is current to December 31 and was sourced from GuerdonData®.

Tables 1 and 2 summarise the segmentation. There are 34 companies in each size-based quartile group, apart from Q1, which has 33.

Table 3 summarises the incumbent-weighted increases in CEO remuneration between 2014 and 2015.

The 13% of CEOs whose TR was unchanged from 2014 to 2015 experienced no increase in TFR and no substantive change in STI or LTI.

The proportion of CEOs whose remuneration increased, decreased or stayed the same is shown in Figure 1. CEOs who did not receive STI or LTI in either year are included in the “Stayed the same – zero” category. 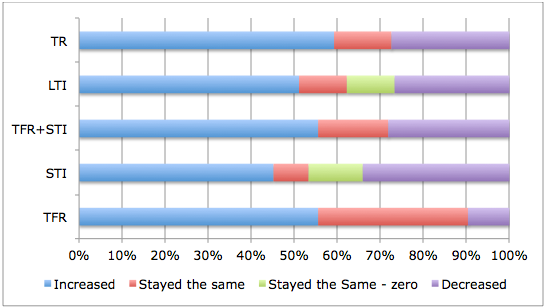 Figure 1: Percentage of CEOs whose remuneration increased, decreased or stayed the same

Does company size make a difference?

The largest companies awarded the smallest change in remuneration from 2014 to 2015.

Figure 2 shows actual TFR for both 2014 and 2015 (the log of market capitalisation is used to make the graph more readable) and confirms that TFR tends to have a direct and positive correlation to company size. 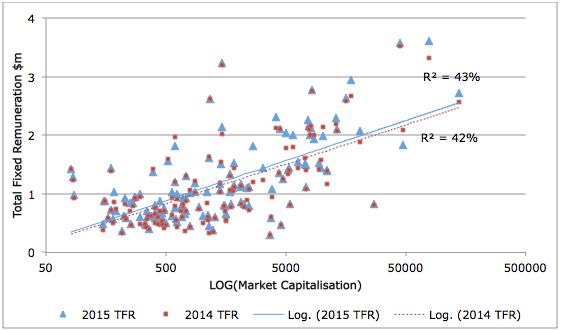 The CEOs of the largest companies (Q4) experienced the smallest percentage change in TFR. The frequency of incentive awards was similar for both years, however, there was a significant increase in the size of LTI awards. The median same-incumbent increase in LTIs was 16%. LTIs make up a steadily increasing proportion of pay for these CEOs, generally at the expense of fixed pay.

The CEOs of the smallest size group (Q1) experienced a decrease in the size of STIs, which is a reversal of our 2014 findings, with a median decrease of 12%. The frequency of STIs has decreased from 79% to 64%. Fixed remuneration and LTI increases have more than compensated for the reduction in STI payments, resulting in a median TR increase of 0.9%. This is related to the increased representation of resources companies that have been adversely affected by reductions in commodity prices.

The largest increase in TR (10.5%) related to the Q2 group (second smallest) companies. All aspects of remuneration increased on average, but the most significant was the increase in both the size and frequency of LTI awards.

There is significant variation in median pay increases across the various GICS sectors. Table 5 summarises median incumbent-weighted increases by sector.

The Healthcare sector produced the largest median increase in fixed remuneration, although it was lower than the median 8.9% in 2014. More than half of the increase in total remuneration is attributable to increased LTIs.

The Industrials sector experienced a significant reduction in frequency and size of STIs, although increased fixed remuneration and LTIs have gone some way to offset the impact.

With only three companies, trend statistics could not be calculated for the Utilities sector.

Our analysis suggests that the relationship between changes to total remuneration and changes in company performance has strengthened over time.

CEOs were excluded if:

Guerdon Associates applies a rigorous and consistent definition of STIs and LTIs throughout our analysis. Therefore our results will be different from analyses reported in the media that have assumed that all equity compensation is long term, or that company definitions of ‘long-term’ are consistent across the ASX 300. Both these assumptions are incorrect. We have also treated negative accounting values disclosed for equity grants as zero, rather than as genuinely reducing the CEO’s remuneration, to avoid nonsense situations where a CEO with fixed pay of, say, $1 million has ‘total remuneration’ of $800,000 because there is a negative $200,000 equity value disclosed.

In 2015, there were very few instances of un-hurdled equity. One-off grants such as sign-on arrangement and IPO grants have been excluded from the analysis. Regular equity awards that form part of guaranteed pay are included in TFR.

Very small increases in fixed remuneration (less than 2.9%) are assumed to be due to variations in payroll timing or statutory FBT expenses. These are included in aggregated statistics, but when calculating the proportion of CEOs whose remuneration increased, these are assumed to have “stayed the same”.