Once again, it’s time for our annual review of changes in board director fees.

We compared the remuneration paid to 961 same incumbent non-executive directors (NEDs) from ASX 300 companies in 2016 and 2017. The median increase (including both directors and chairmen) was 2.5%. This is very close to the 2016 median increase of 2.3% though 25% higher than the 2.0% increase experienced by CEOs. (See our CEO pay increase analysis HERE.)

Table 2 below shows the proportion of chairman and directors that received increases and decreases.

Table 3 below shows the breakdown of NEDs’ remuneration and the proportion of NEDs that receive each component over a number of years.

These percentages are based on statutory disclosures that have been subject to audit. They may seem surprising because superannuation contributions are not made in respect of a proportion of directors.

Over the last few years, the sectors with the highest fee increases have been Utilities and Healthcare. While utilities now has the highest median remuneration of all the sectors, this year the Consumer sector has seen the largest fee increases, recording a median increase in total remuneration of 4.6%. The consumer sector was also the sector with the second highest proportion of NEDs receiving an increase.

These figures exclude chairmen but include deputy chairmen. Due to exclusions and small sample sizes for some sectors, the chairmen statistics have not been reported.

2016 saw the creation of a new GICS sector. Real Estate was moved out from under the Financials sector and promoted to its own sector.

Within the energy sector, several directors experienced either no change (33%) or a reduction (23%) in fees received. On average, this sector saw no increase in remuneration, that is, a median change in remuneration of 0% – the lowest median of all the sectors. This may reflect the challenging climate with regard to the oil industry over 2016 and 2017. Additionally, most of the companies in this sector (11 out of 14) make up the upper quartile of market capitalisation, where large fee increases are rare.

The average fee increase of 11% within the IT & telcos sector was higher than the median increase and this was due to some significant increases in NED fees among these companies.

Figure 1 below shows the interquartile range for the increases in fees in 2017 by sector (the median increase is shown by the dark blue horizontal line). 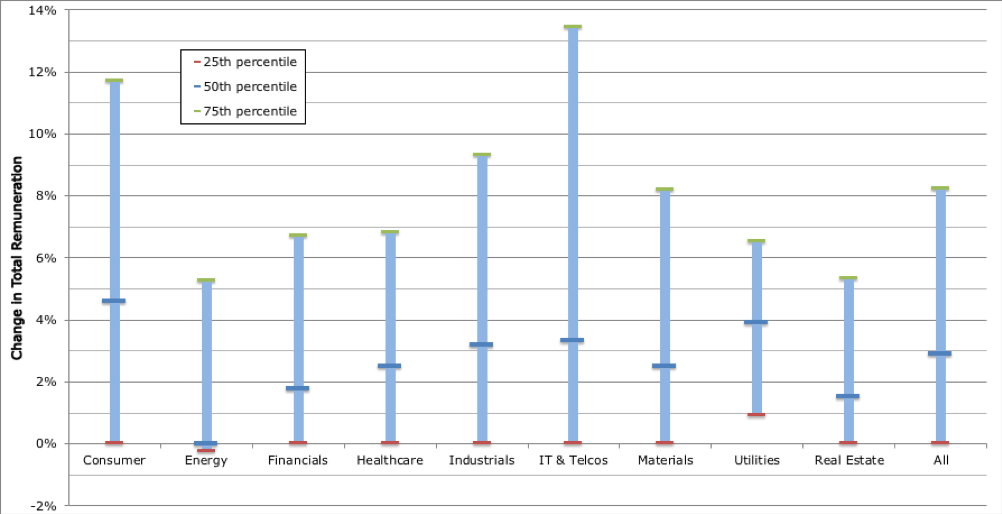 The 240 companies used in the analysis were split into quartiles based on market capitalisation. Since larger companies tend to have larger boards, the number of NEDs in the top quartile companies is higher. 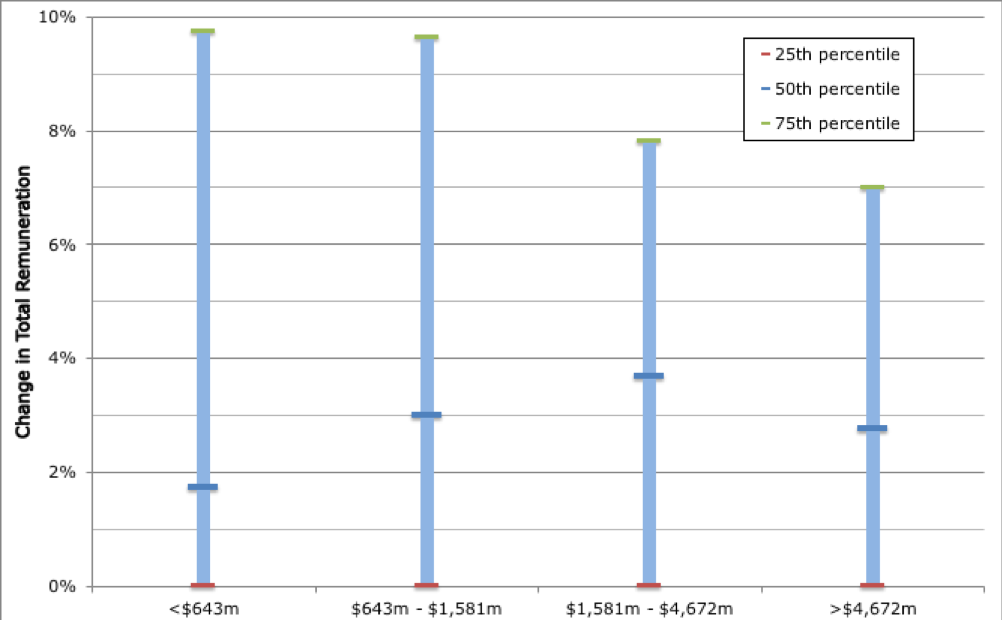 The 961 NEDs (791 NEDs excluding chairmen) were drawn from 240 ASX 300 companies from all industries. Newly listed companies and companies listed on foreign exchanges that do not disclose remuneration in Australia were excluded. The market capitalisation of these companies ranged from $124 million to $156 billion, based on a 30-day average to 22 January 2018.

We derived our results by analysing the change in non-executive director remuneration from 2016 to 2017 with data downloaded from GuerdonData®., Guerdon Associates’ proprietary database of executive and director remuneration data for ASX 300 companies. (Now available for client subscription – a demo of the database in action is Here. For enquiries contact us on info@www.guerdonassociates.com).

To validly determine the rate of increase, we calculated the change in fees for each individual NED (this is the ‘incumbent-weighted’ increase). An alternative would be the remuneration-weighted change, which examines the change in aggregated statistics.