Executive pay is not distributed equally, and that is a good thing too
12/04/2021

For listed companies, the remuneration for the CEO and other executive KMP must be disclosed. The forced transparency means that any executive incumbent who earns a premium over the other members of the senior executive team is unlikely to remain a secret for very long.

As a result, companies may find themselves trying to prioritise, for various reasons, fairness over the value of and demand for an individual executive. Senior executives may end up being paid uniformly, more or less, across the senior executive suite regardless of their individual ability. 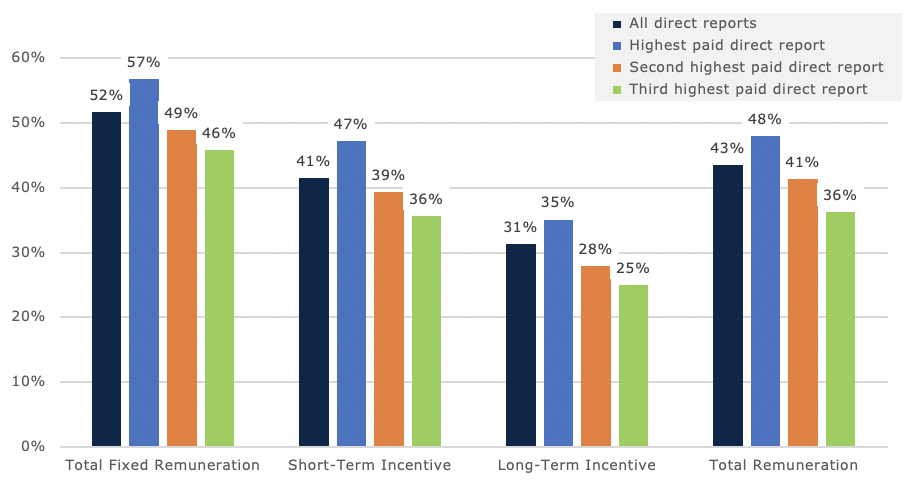 Additionally, we also looked at pay dispersion between executives within the same company. To do this, we analysed the pay relativity between the highest paid and the second highest paid direct report, and between the second and third highest. The figure below illustrates our findings.

The analysis in Figure 1 shows that there is indeed no “fairness” bias in ASX companies. Pay is not distributed evenly across the executive KMP team. The median total remuneration of the highest paid direct report is 48% of the CEO’s pay, while the median total remuneration of the second and third highest paid executives is  41% and 36%, respectively, of the CEO’s pay. Additionally, based on Figure 2, average total remuneration relativity between the highest paid direct report and the next highest is 81%, while that between the second highest and third highest is 85%. One could say that there may appear to be a favourite executive in each company.

Only data for incumbents with at least 3 years tenure at the end of the financial year were utilised. Doing so allows for a robust look at pay trends across the companies. This sample accounts for 153 companies with the remuneration for the CEOs and direct reports disclosed. Companies with financial year end December 2020 were included where available.