The CDP Majors is a not-for profit that collates information on greenhouse gas emissions for large companies and cities. It released a report in 2017 released comprising a list of companies with the top greenhouse ­­­gas (GHG) emissions between 1988 and 2015. Guerdon Associates examined the incentives of companies on this list, excluding state-owned companies.

Given the recent public spotlight climate change has taken, Guerdon Associates has taken a look at the climate-related incentives of larger global public companies with high greenhouse gas footprints. This comes hot on the heels of the Climate Action 100+ releasing its progress report (see HERE) . The Climate Action 100+ is an investor-led initiative to improve pressure GHG emitters to take action on climate change. AustralianSuper is a member of this group. Future articles will consider this group’s perspectives.

Table 1 shows the climate-related incentives adopted by the companies in the most recent remuneration report.

The incentives are generally designed as part of the STI plans of companies. The LTI plan does not usually include these metrics. They tend to be on 1 or 2 financial metrics of the company such as TSR or EPS in the long run. 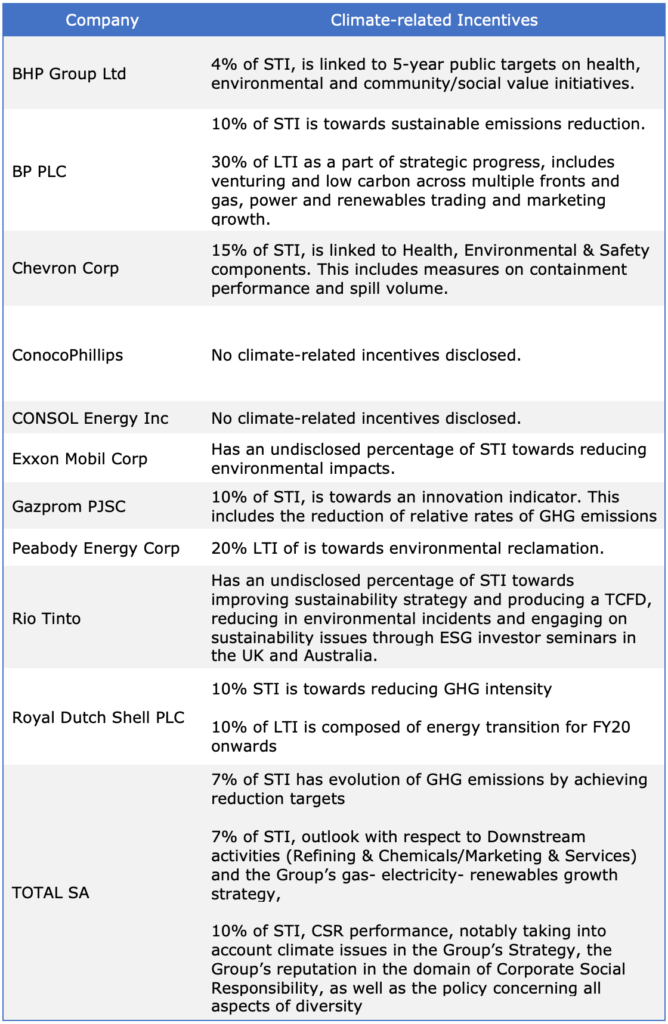 Based on the table, it appears that the level of sustainability disclosure of the company influences the standard of the climate-related incentives. The European-based countries appear to have a large portion of their incentives geared towards reducing their impact on the climate. The American companies have a much lower portion of the incentives geared towards climate change or nothing at all.