The second report in the BCEC|WGEA Gender Equity Insights series was published last week. It seeks to add to and strengthen the evidence base that exists around gender pay gaps in Australian workforces. The report uses unique data reported to the WGEA, capturing 4 million employees and more than 12,000 employers in the 2015-16 reporting period.

The findings are stark. The pay gaps are significant. And the sheer scale of addressing it will remain a huge challenge when just looking at the issue, for example, in terms of the pipeline of women for leadership positions, and the segregation of the genders by industry.

This article summarises the report’s key findings, and considers the current state of pay inequality between leaders just because of their gender.

The pay gap is evident from the start – graduate pay

Except for organisations with the highest concentrations of female managers

For part-time managers, women earn on average 27.1% less than their male peers, with a wider gap of 34.7% in female-dominated work environments.

High pay for women a reflection of their rarity?

There appears to be efforts to rebalance gender participation by industry. But this has a cost. Australia’s most male-dominated industry delivers the highest pay to women. Women employed full-time in Mining earned on average $139,053 total remuneration in 2016. The next top-paying industries for women were Electricity, Gas, Water and Waste services ($106,100) and Banking and Finance ($105,438). The lowest paid industry for women was Retail Trade at $65,865. Women employed in the most female-dominated industry, Health Care and Social Assistance, earned on average $80,026. The pay difference is inversely correlated with the extent of women’s industry representation.

The gender pay gap grows with level, climbing to 26.5% for Key Management Personnel (KMP), an annual difference of more than $93,000 in total remuneration.

The good news? The pay gap for all manager categories declined between 2015 and 2016, with the KMP pay gap reducing by a 2.2 percentage points. However, it is difficult to fathom why the extent of pay difference should be so significant at executive level.

Pay gaps among managers are exacerbated by the greater share of incentive pay awarded to men. For KMP, nearly $40,000 of the annual difference in pay is made up of additional remuneration including incentives.

Reversing the situation – it will not be next year

While the report shows clearly is a range of well presented figures and graphs that pay inequality decreases as with the higher the proportion of women in management, the following graph indicates that achieving more balance in leadership roles will not happen next year.

Figure 1: Gender distribution of KMP and executives in companies: 2016, by industry 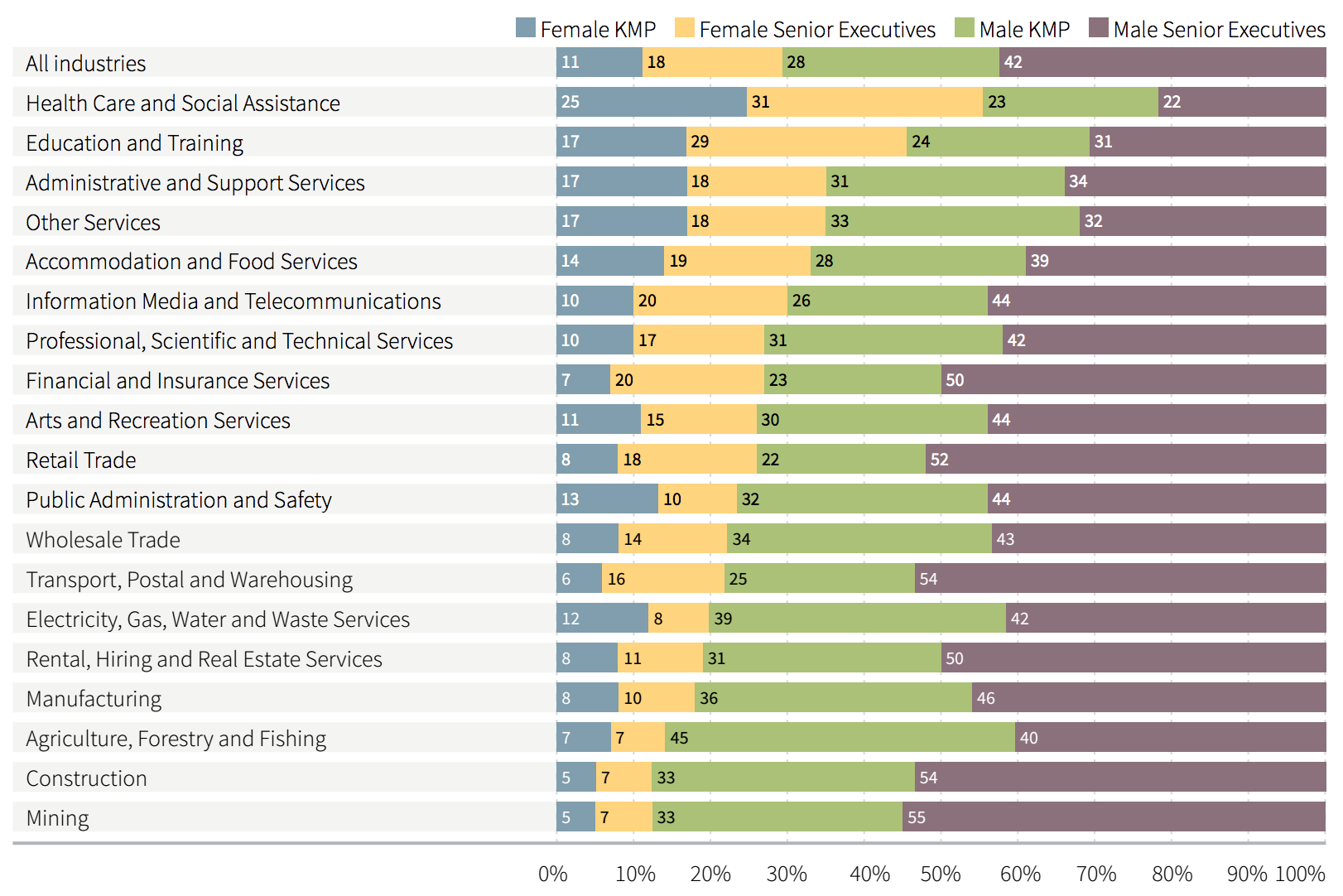 Reading through the report it is staggering the extent that it appears that companies are not effectively utilising the workforce’s talent and potential.

It is suggested as recommended reading for all company directors. See it HERE.