What is the likelihood that an absolute TSR LTI will vest versus a relative TSR LTI?
12/10/2020

Our research and analysis examined the vesting outcomes for LTI plans with performance periods ending between FY17 and FY19 for the current ASX 200 (see article from last month HERE).

This article will focus on performance measures based on total shareholder return (TSR) and the differences in outcomes between absolute and relative TSR hurdles.

Of all the ASX 200 LTI plans that vested between FY17-FY19 (inclusive of market and non-market hurdles), 75% had relative TSR hurdles while 13% had absolute TSR hurdles. There is a strong bias towards relative TSR, reflecting the preferences of many investors and an influential proxy adviser, perhaps in the mistaken belief that such measures are objective and less likely to be gamed (see HERE).

TSR hurdles remain a top choice in the ASX 200. Of all ASX 200 company plans with market-based hurdles (i.e. where there is a reference to share price), 91% of these incorporate relative TSR as one of the measures.

The charts below display relative TSR and absolute TSR vesting outcomes over the three-year period. 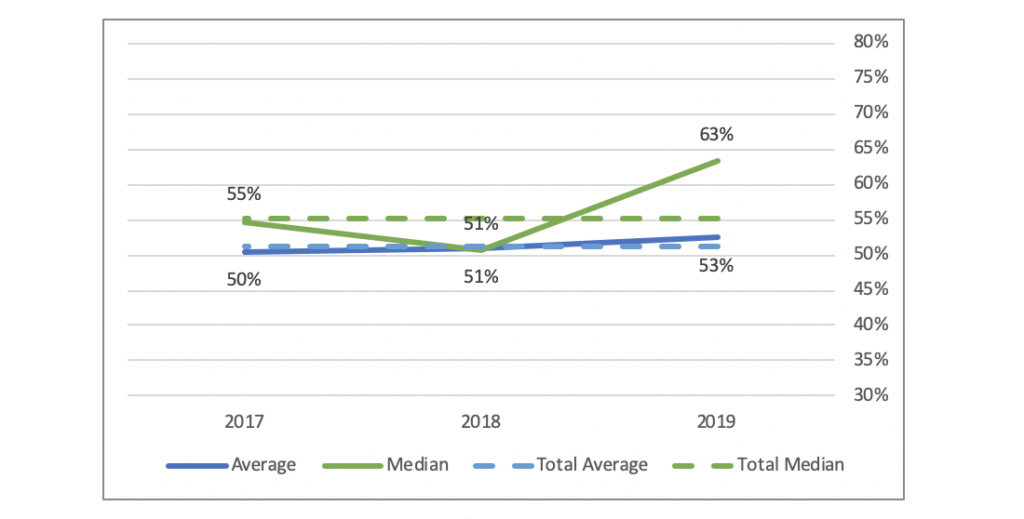 Similar to the vesting outcomes for relative TSR, the average vesting outcome for absolute TSR was relatively flat over the three-year period and median outcomes were more volatile with vesting between 50% to 85% of maximum.

Some boards consider replacing LTI arrangements with fixed equity grants that vest on the basis of time only. The discount that should be applied to the face value of an LTI grant with TSR measures can be informed by this analysis of historical vesting outcomes, and the view of some investors and proxy advisers that the discount should be greater than 50% is not supported by evidence.