This article examines changes in statutory remuneration for same incumbent Chief Executive Officers (CEOs) and Managing Directors (MDs) who led ASX300 companies during both the 2016 and 2017 reporting periods.

In a nutshell, fixed pay hardly moved, as many received more annual incentive as lost it, and LTIs magically increased probably because the accountants reflected a good financial year into a greater likelihood that something will vest.

After exclusions (see methodology appendix) we examined the remuneration changes for the full sample of 173 company executives who survived two full years, and subsets segmented by GICS sector and company size.

The median change in short term incentive was zero.

In a symmetrical result rarely seen, the 25th and 75th percentile for the change in STI were evenly placed around zero. The former was a reduction in STI of 29% while the latter an increase of 29%.

The LTI result is not likely to be indicative of grant level increases or increases in take home pay. Long term incentives values reported in statutory accounts are a fair value based on accounting standards, and reflect discounts for the probability of vesting in either the fair value of the instrument, or the number expected to vest, and are an amalgamation of multiple years of grants amortised over their performance period.

(It is possible to have negative LTI values. This is why Guerdon Associates uses an alternative methodology to benchmark LTI values in client work rather than benchmarking statutory figures.) 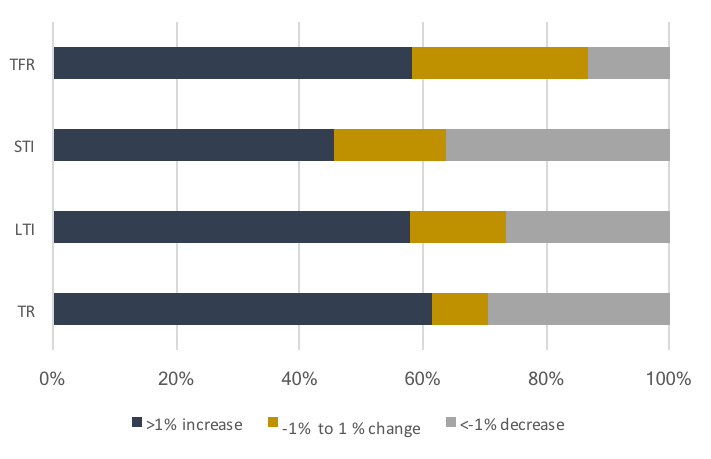 Figure 1: Changes by component of pay

Increases in remuneration varied across sectors substantially. In its crudest form pay increases follow other peoples’ money. It always has. That is, where capital flows increases executive demand, and exacerbates supply shortages, resulting in pay increases at all levels, and observed most clearly in KMP remuneration disclosures. 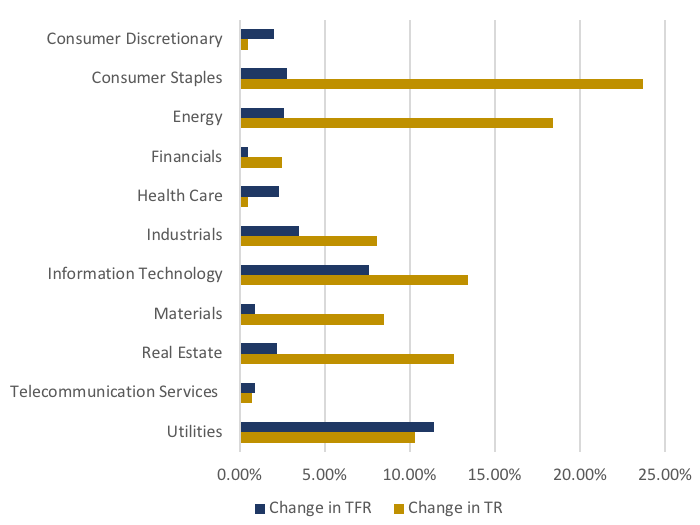 The following discusses each of the above elements in more detail.

The change in the remuneration-weighted average long term incentive (LTI) of 28.7% is more reflective of the true trend in long term incentive changes compared to the figure for incumbent-weighted average LTI change of 48.9%. The latter is predominantly due to large percentage increases among few individuals starting from a low level of long term incentive. But, even on a remuneration weighted basis, LTI increases are still high. To an extent, though, this may reflect an accountant’s view of how many share rights and options are likely to vest given company financials have markedly improved last year.

Company size was defined using a 30-day average market capitalisation as at 19th Sep 2017, and the companies were segmented into quartiles of company size.

The limitation of segmenting the results into multiple sectors are that small sample sizes introduce large variability in the observed values, and apparent results may be due to data-mining effects rather than underlying causal factors.

It is for this reason that the STI and LTI figures are not in the above table, the sample sizes and variations in incentive levels mean that the results may not be indicative.

The population of ASX300 listed companies was taken as of the September 2017 S&P ASX300 index rebalancing. Remuneration figures for the executives corresponding to these companies were subsequently obtained from GuerdonData®, a database of remuneration information sourced from the statutory disclosures present in company annual reports.

Companies with financial years ending in December were removed from the sample, since these companies had not disclosed their 2017 remuneration at the time of the analysis. Similarly, companies that listed on the ASX during 2016 or 2017 were removed, since they have no remuneration disclosures available prior to their listing. Companies which lacked statutory disclosures for other reasons were also removed.

Since our analysis spans two sets of reporting periods, it was required that the executives in question held their position for this entire two-year timeframe. Executives which either changed position or served a part-year term were excluded from the analysis.

Following this sample reduction, 173 MDs and CEOs remained in the analysis. Where there was no MD or CEO, the Executive Chairman was analysed.

The sample reduction is a source of bias in the study. Taking the constituent index at the most recent reporting period (Sep 2017) has the effect of excluding companies which have previously fallen out from the index, and replacing them with recent additions. This may cause a positive bias if there is either a correlation between share price performance and remuneration, or market capitalisation and remuneration, since the sample reduction selects for increased share prices and market capitalisations.

1-year total shareholder return (1-year TSR) was elected for benchmarking remuneration against company performance. 1-year total shareholder return figures for the ASX300 listed companies were sourced from Bloomberg. This information was obtained current to the dates of 19th September 2017 (i.e. immediately following the S&P index rebalancing) and 19th September 2016 (i.e. one year prior).

Where the STI or LTI was zero in the 2015-2016 period, the percentage change was omitted due to arithmetic error.