Management gender diversity goes south, where are the incentives?
12/10/2020

Diversity at the top seems to be heading in the wrong direction according to a report released by the 2020 Chief Executive Women ASX 200 survey.

There were 25 CEO appointments during the year, but only one was a woman. Two women must have left their ASX 200 CEO positions, so there are now less female CEOs leading ASX 200 companies than last year, although with such a small number of women CEOs (12 in 2019 down to 10 in 2020) only a small amount of turnover or appointments can have a large impact.

Concerning is that nearly two-thirds (65%) of ASX 200 companies have no women in positions with profit and loss responsibility on their ELT. This is an increase from 57% last year.

Of the 25 ASX 200 CEOs appointed in the past year, 76% came from line positions with profit and loss responsibility; a further 20% came from the position of Chief Financial Officer. There has been no increase in the number of female CFOs in the last year, although it had almost doubled between 2017 and 2019 (increasing from 9% to 16%).

If diversity in the pipeline to the CEO position is not improving, it seems unlikely the number of female CEOs will increase.

Some might question whether it has to do with the lack of executive pay riding on improving gender diversity.

Guerdon Associates’ recent research in collaboration with our sister firms in the GECN Group for its ESG report (see HERE) for a summary, the full report will be released later this year) found that only 17% of the ASX 100 disclosed that they based a portion of the CEO’s incentive on a gender diversity metric, such as percentage of women in the workforce/management team or gender pay equity.

Companies in the financial services or real estate sectors were the most likely to have disclosed gender diversity metrics on which an executive’s pay is dependent. Some sectors had no companies disclosing gender diversity as an incentive pay KPI, as can be seen in Figure 1. 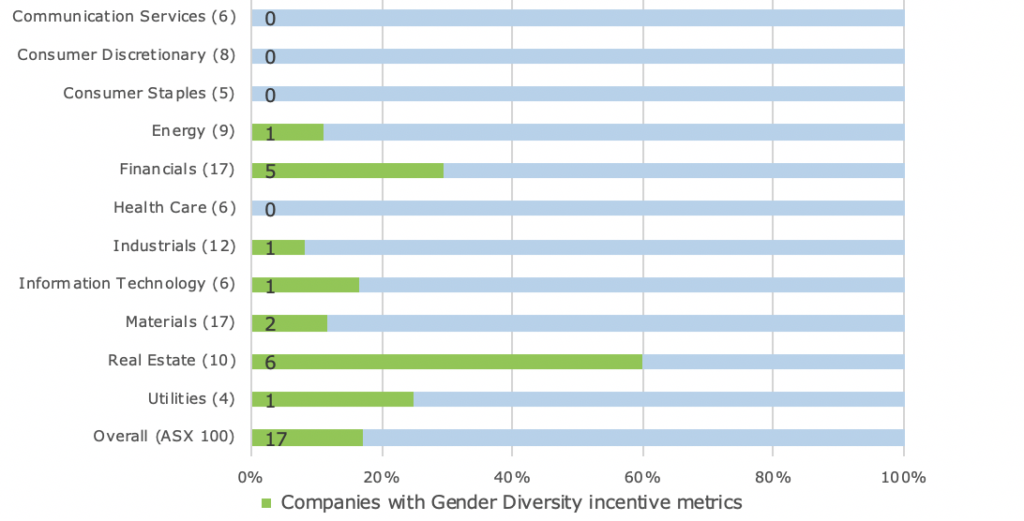 While Australian women might be disheartened by this news, they might also comfort themselves that when considering employment opportunities in the top companies across global markets, the European market was the only one with more companies than Australia disclosing executive incentive pay gender diversity metrics as shown in the table below.

An example of a bank that appears to take diversity seriously within incentive plans is JP Morgan (see HERE). In this case, diversity goals includes targets for ethnic/racial diversity, as well as gender diversity.

The influential industry superannuation fund, HESTA, recently launched its 40:40 vision of having at least 40% women at CEO-1 level by 2030 (see HERE) and has reportedly indicated its willingness to use its AGM votes to hold companies to account (see HERE). The survey shows only 15% (up from 12% in 2019) of the ASX 200 currently meet the 40:40 Vision. A further 30% of companies are ‘on the cusp’ with 30% to 39% female representation in their ELT.