It is time for Guerdon Associates’ annual review of pay increases for Chief Executive Officers (CEOs) and Managing Directors (MDs) who led ASX 300 companies in the past 2 reporting periods.

The sample consists of 164 ASX 300 CEOs who served two full years over the FY 2020 reporting period. Remuneration data was sourced from GuerdonData®, and total shareholder return (TSR) was sourced from Bloomberg®.

The median CEO total remuneration (TR) decreased by 2.3%. This can be largely attributed to the sharp decline of 17.1% in short-term incentives (STIs).

In past analyses, pay movements lagged TSR outcomes. This year, both TSR and TR decreased, with a median TSR outcome of -7.0% and median decrease in TR of 2.3%. A comparison of company TSR and TFR movements shows the majority of CEOs who had a decline in TFR were from companies which saw a decline in market capitalisation. However, the inverse is not true, and some CEOs saw an increase in TFR despite the drop in market capitalisation.

While the median increase in ASX 300 CEO total remuneration has been trending downwards over the last three years, this year saw a decline in pay with more than half the CEOs experiencing a decrease of more than 2.3%. 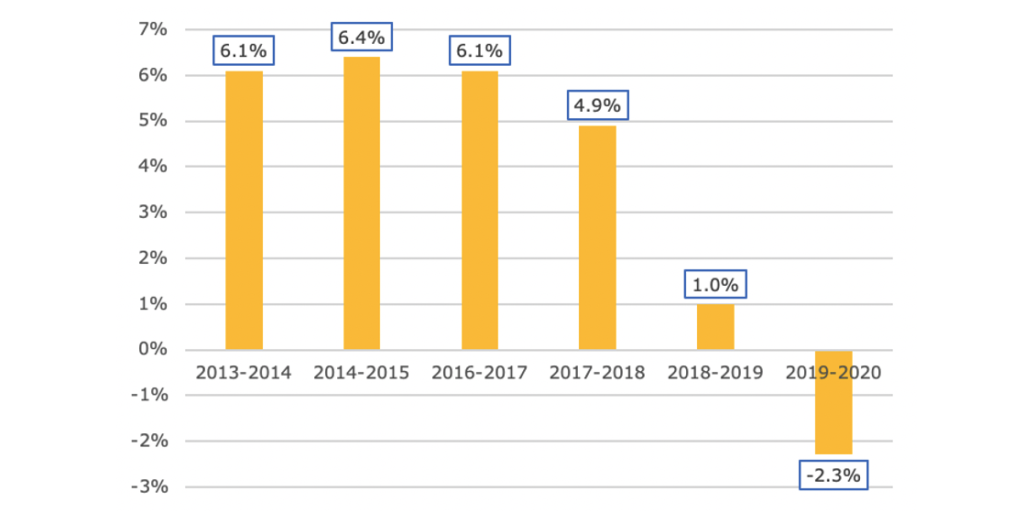 The overall decrease can largely be attributed to the disruption of COVID-19. Temporary TFR reductions, the cancellation of FY20 STIs and the reduced likelihood of vesting for on-foot LTIs have all played a part in the reduction of TR. See HERE.

The graph below shows the proportion of CEOs that saw a year-on-year increase or decrease in each remuneration component by more than 1%, or a change within 1%. 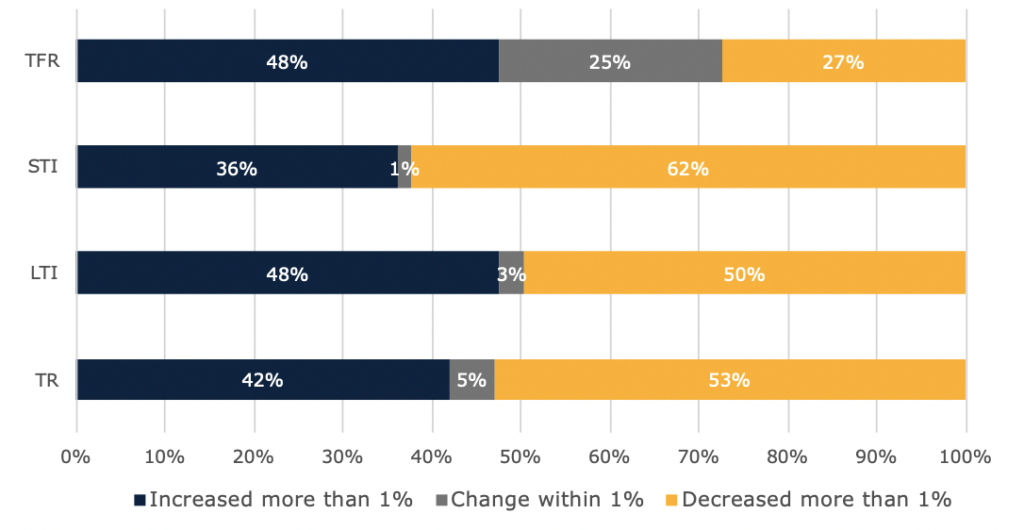 Almost half (48%) of the sample experienced an increase in TFR, while 25% saw a change within 1%. The 27% of CEOs who experienced a decrease in TFR is nearly double the 14% in the prior year.

The majority of CEOs saw a decrease in STI. The proportion of CEOs with STI decreasing has moved from 53% last year to 62% this year. The movements in LTIs were more evenly split. Half the CEOs experienced a decrease in their LTI, up from last year’s 44%.

Overall, 42% of the CEOs saw an increase in their total remuneration, which is down from 50% last year. Fifty-three percent saw a decrease, which is up from the 42% last year.

The table below shows the median change in remuneration and TSR based on 30-day market capitalisation quartiles, as at the 30th September 2020.

The table below shows the median change in remuneration and TSR across the different sectors.

The sector breakdown shows the disproportionate effect of COVID-19 on each industry.

The Information Technology sector received the highest median growth in TFR with an increase of 3.0%. However, this is offset by the decrease in STI resulting in no change in TR for the median IT company.

The Health Care sector received the highest growth in median total remuneration with an increase of 17.9%. The increase was largely driven by an increase in LTI.

The Energy sector saw the biggest decrease in TSR due to oil price movements. Despite this, they experienced the fourth highest change in TFR and TR.

The figure below shows ASX 300 company TSR relative to the CEO change in fixed pay, by sector. 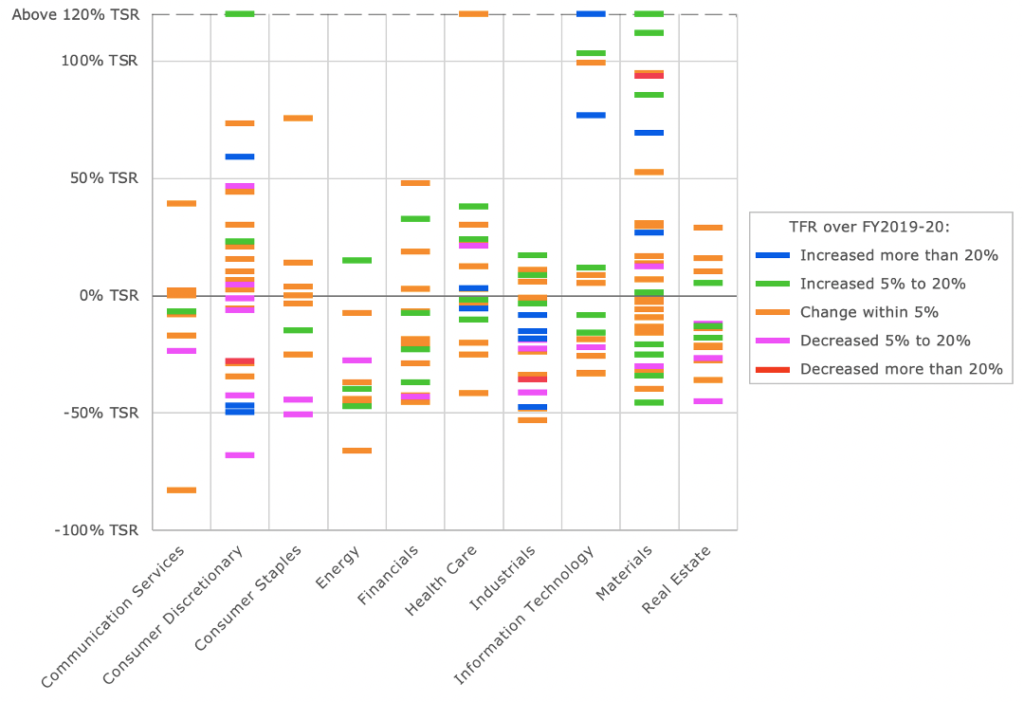 To reduce the effect of spurious outliers on the average, the data set is truncated at the 5th percentile and 95th percentile for each remuneration component. The table below shows the average and quartiles.

A simple average across the ASX 300 CEOs weighs each incumbent equally. This approach does not provide an accurate indication of the overall market as it is skewed by lower paid CEOs in the sample who experience highly volatile percentage changes in pay due to:

The ASX 300 incumbents were taken after the September 2020 index rebalancing. Remuneration figures for the CEOs were obtained from GuerdonData®, a database of remuneration information sourced from the statutory disclosures present in company annual reports.

Companies that have not disclosed their 2020 annual reports at the time of analysis were removed from the sample. Companies that floated on the ASX in 2019 or 2020 were removed, since they have no remuneration disclosures available prior to their listing. Externally managed entities and companies incorporated outside of Australia which do disclose remuneration in accord with Australian accounting standards were also removed.

CEOs who changed position over the 2019-2020 period or served a part-year term were excluded from the analysis. Termination benefits were removed from CEOs leaving at the end of the two reporting periods.

Some results may be reflective of data-mining effects rather than underlying causal factors, due to the limited sample size of 164.